Did you know that there are dozens of different types of pineapples? The pineapples you find at your local grocery store or farmer’s market may look similar, but there is actually far more than meets the eye. Dozens of different varieties are grown all across Brazil, Thailand, Phillipines, Costa Rica, Hawaii, and more. Likely, the type of pineapple sold at your grocery store varies as to which part of the world you live in. Regardless of which variety they are, pineapples are a delicious ⁠treat — whether they’re chopped up in a salad, blended up into a smoothie, or covered in chocolate. Try our Pineapple Drip Cakes™ And Swizzle Berries® for a pineapple treat so decadent, your mouth will water.

Pineapple, also known as Ananas comosus, is a shallow rooted tropical plant that grows two to four feet tall. Pineapples are a widely recognized fruit, but many people don’t realize that they’re a compound fruit – a fruit that develops from many smaller fruits which fuse together around a central stalk. They grow best at a temperature of 65 to 75 degrees. Different types of pineapples are grown in different parts of the world. The types vary according to size, shape, color, and more.

Pineapples are mostly grouped into into four main classes: Smooth Cayenne, Red Spanish, Queen, and Abacaxi, but there are some outliers that don’t fit into any of these classes. Some varieties are more resistant to disease and are better for commercial transport, while others are more tender and cannot be shipped long distances. Pineapple varieties also differ as to sweetness, acidity, and fiber content. 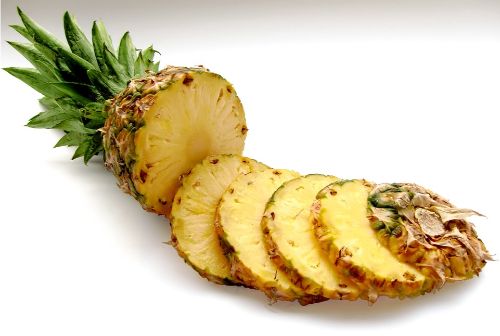 Abacaxi pineapples are very sweet and quite resistant to disease, making them a very popular crop to grow. They weigh anywhere from two to eleven pounds. They’re spiny and tall, and their flesh is nearly translucent in color. They’re delicious, but too delicate for commercial purposes.

Aptly named, Red Spanish pineapples are orange-red in color and are grown in the Caribbean. It produces fruit that has a light-yellow color and an aromatic flavor. They’re sturdy and high in fiber, but aren’t as tender as other varieties.

Smooth Cayenne pineapples are likely the ones you’d find in a typical food store in the United States. They’re the main type of pineapple grown in Hawaii, and are bigger than most other varieties, weighing in at four to ten pounds. They feature a distinctive yellow flesh and are very juicy.

Pernambuco pineapples are mostly grown in Brazil. They’re white, tender, and juicy with a mild flavor. They’re yellow both inside and out and feature distinctive long, spiny leaves.

Mordilona pineapples are grown in the northeastern Andes of Colombia and Venezuela. They’re large, irregular, and cylindrical with a yellow to orange peel. The flesh is cream-colored and sweet.

Kona Sugarloaf is a type of Smooth Cayenne pineapple. It features white flesh with a high sugar content and no acidity. It’s unusually sweet and delicious. One distinctive feature of this type of pineapple is that its core isn’t woody, but is tender and completely edible.

Brecheche pineapples are small, cylinder-shaped, and olive colored. The plant is completely spike-free. The flesh of Brecheche is yellow, very fragrant, and juicy with a small core.

Signapore Red pineapples feature green leaves with a reddish stripe at the end. The fruits are reddish, cylindrical, and small with golden-yellow flesh. They’re disease and pest-resistant and are great for canning.

This pineapple is named after the Indian tribe who grew it in Venezuela. The fruit is bottle-shaped and orange-colored. The flesh is deep yellow, slightly fragrant, and has a small core.

No matter what variety of pineapple you choose, it’s sure to be delicious. Try our Chocolate Dipped Pineapple Daisies® Box for an amazing pineapple treat. It includes twelve delectable chocolate covered pineapple daisies. Delish!