There’s nothing quite like biting into a fresh, juicy apple. It’s crunchy, juicy, and perfectly delicious. Not only are apples tasty to eat as is, but they’re also great in apple pies, applesauce, apple muffins, and so much more. However, if you always grab the same go-to variety, you might be surprised to learn that there are over 7,500 different types of apples, over 2,500 of which are grown in the United States. From sweet and crispy to tart and chewy, there’s an apple variety for you. We’ve gathered up 50 of our favorite types of apples to try so you can find a new favorite.

If you’re looking for the sweet crunch of an apple, consider our Apple Daisy® arrangement. It’s packed with chocolate dipped apple wedges and topped with a giant apple-shaped pineapple. 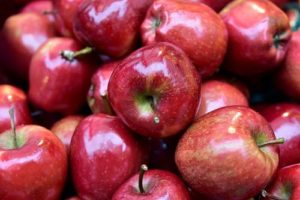 Red Delicious apples are the quintessential apple and are one of the most famous American apples. It’s a medium-sized apple with a tall conical shape and features an intense crimson color that provides shelf appeal.

A cross between a yellow transparent and a Montgomery, the Lodi apple provides an early-season harvest of yellowish-green apples. It boasts a soft, white flesh with a sweet-tart taste that’s perfect for pies and applesauce.

Stayman-Winesap apples are a cross between a Stayman apple and a Winesap apple, resulting in an incredibly delicious variety. Its firm yellow flesh, crisp texture, and wine-like taste make it memorable and delicious. 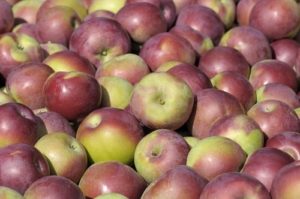 McIntosh apples were discovered in the 1800s by a Canadian farmer named John McIntosh and feature a sweet and tart flavor that’s hard to beat. They have distinctive red and green speckled skin, soft flesh, and a taste reminiscent of apple cider.

Jazz apples have a sweet-tart flavor with a mild pear undertone. They’ve become incredibly popular in the United States and have a dense, fine-grained texture that’s perfect for eating right off the tree.

Pronounced “MacCowan,” these little apples are one of the best-tasting types of apples on the market. They’re sweet and tart, firm, and juicy. However, they have a short growing season and are only available for a short time each year. Melrose apples are Ohio’s state apple for a reason: they look good, taste great, and get even better in storage. Sweet and sugary, they have a rich taste that becomes more flavorful and aromatic with age.

Cameo apples were cultivated by accident, but they’re believed to have descended from the Red Delicious and Golden Delicious varieties. They’re more flavorful and a bit more tart than Red Delicious apples.

Despite having a similar name, the Golden Delicious apple is not related to the Red Delicious. Instead, they are related in name only. They have a sweet flavor with crisp, light yellow flesh.

Mutsu apples, also known as Crispin, are a cultivar between Golden Delicious and Indo apples, discovered in Japan. They’re big and juicy and have a sweet, slightly tart flavor with notes of honey.

Discovered as a chance seedling in British Columbia, Ambrosia Gold apples have a distinctive honey flavor. They have a bright, almost iridescent pink blush color with a tender and juicy texture. Developed in New Zealand, the Pacific Rose apple variety is a cross between a Gala and a Splendor apple. It features a bright pink hue derived from its Splendor lineage and features a sweet, dessert-like flavor.

One of the most famous of all American apples, the Northern Spy apple originated in New York in about 1800. It’s well-balanced, crisp, and juicy and features the quintessential “apple” taste. 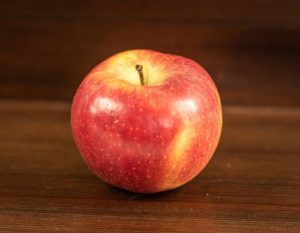 Bright and beautiful, Braeburn apples have a red-to-orange color with red stripes. They have a sweet-tart flavor with a hint of cinnamon and are crisp and juicy.

Gravenstein is one of the very oldest varieties of apples still in existence. The fruit is medium to large and features stripes of red and blush. It has a crisp and tart taste with just a touch of honey.

Take a bite of a Paula Red if you’re a fan of tart apples. This variety boasts white flesh with a sweet, tart taste and a hint of strawberry. They’re harvested in the late summer or early fall. 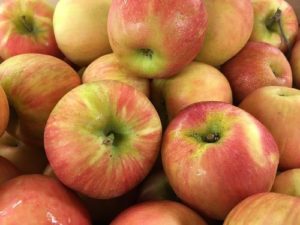 True to their name, Honeycrisp apples have an exceptionally crisp and juicy texture. Their flavor is hard to pinpoint, but it’s aromatic, sweet, and incredibly delicious.

Discovered and cultivated in 1870 in Arkansas, Arkansas Black apples feature a purple to ebony hue. Straight from the tree, they’re rock hard and sour, but when aged in cold storage for a few months, they turn sweet with notes of cherry, cinnamon, vanilla, and coriander. 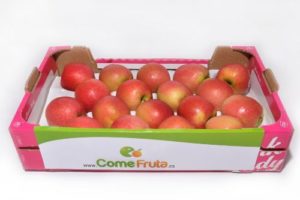 Perfectly pink in color, Pink Lady apples have a sweet-tart flavor and delightfully effervescent finish. They feature high sugars and acids that make them slow to oxidize, or brown, when sliced, so they’re perfect for salads or eating on the go.

Discovered in Massachusetts in 1740, Baldwin apples were the all-purpose standard until the winter of 1934 when tens of thousands of trees died and the McIntosh variety took over. They’re mottled and striped with red and deep carmine and feature a crisp, juicy flesh that’s perfect for eating or cooking. 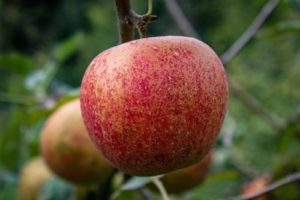 As their name suggests, Jonagold apples are derived from the Jonathan and Golden Delicious varieties. They are large and feature yellow skin with blushes of red. They retain the tartness of a Jonathan with the sweetness of a Golden Delicious.

A cross between a Jonathan and a Golden Delicious, the Blushing Golden apple boasts the sweetness of a Golden Delicious with hints of pear, honey, and banana. It features a yellow color with a “blush” of pink or red. 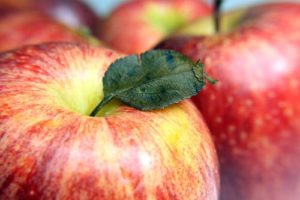 Originating in New Zealand, Gala apples are closely related to the Golden Delicious variety. Sweet and crisp with a rich full flavor and a vibrant yellow to red color, they’ve become a favorite apple variety.

Enterprise apples are stunning bold red skin dotted with gold. They’re a wonderful apple for eating, but they are an even better cooking apple, lending their tartness to pies and baked goods. 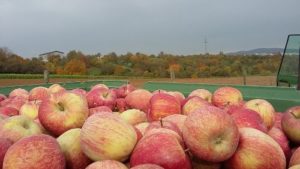 With their sweet-tart flavor, Fuji Apples are a treasured favorite. Made from a cross between Red Delicious apples and a lesser-known variety called Ralls Janet, they’re crisp, firm, and juicy with beautiful pink speckled skin.

One of the early apples ready for picking in August, the Ginger Gold apple has a sweet gingery taste with a mild tartness. Ginger Gold apples are bright golden-green with a crisp texture, making them great for snacks, salads, and baking in pies. 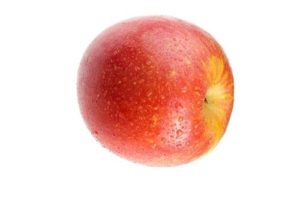 Originating in 1700 near the village of Newtown on Long Island, New York, Pippin apples are crisp and juicy. They offer a distinctive taste with hints of pine, citrus, walnut, and green tea.

Most likely the parent of the Golden Delicious apple, the Grimes Golden is considered one of the finest American apples. It’s crisp and juicy, boasting a sweet and aromatic flavor with just a hint of spice.

The Pazazz apple is a descendent of the Honeycrisp variety but has a unique look and taste all its own. It features the satisfying crunch of a Honeycrisp apple with a burst of sweet, yet tart flavor.

An excellent baking apple, Rome apples were discovered in the town of Rome, Ohio. Rome apples are glossy red and maintain their shape when cooked or baked, making them perfect for pies, cobblers, and so much more.

Discovered in 1983 In Aomori, Japan, Hokuto apples are a cross between the Fuji and Mutsu varieties. The apples are so large that a Hokuto was registered as the heaviest apple in the world in the Guinness Book of World Records.

A snappy texture and sweet, juicy flavor with gentle hints of spice and vanilla make this apple unique. Snapdragon apples are perfect for snacking or pairing with cheese, bacon, peanut butter, and so much more. 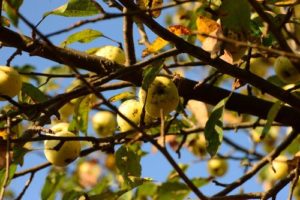 Bright red in color, Idared apples are initially tart when picked but mellow out over time. They feature crisp flesh with a sprightly, aromatic, and refreshing flavor.

The SnowSweet apple boasts a sweet flavor with a slight tartness and rich, buttery overtones. Its most striking characteristic is its snow-white flesh that is slow to brown, making it perfect for slicing and displaying ahead of time. 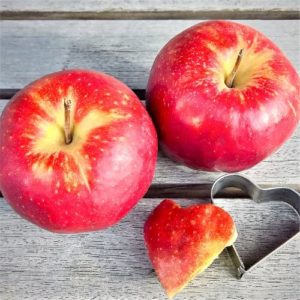 A cross of the Golden Delicious and Monroe apple varieties, the Autumn Crisp apple is highly resistant to browning, making it perfect for salads. It’s also said to have a higher concentration of vitamin C than most apples.

True to its name, the Jonamac is a cross between Jonathan and McIntosh apples. It’s closer to a McIntosh in terms of flavor, but it’s a bit sweeter and less soft than a McIntosh.

Bred in Japan in the mid-20th century, this apple is a cultivar of the Golden Delicious apple that improves on the sweetness and texture of its parent. It’s large, with yellow to green skin and an excellent sweet taste with little tartness. 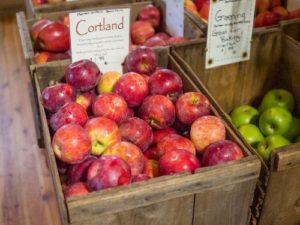 Botanists created the Cortland apple at the New York State Agricultural Experimental Station in New York in 1898 as a cross between a McIntosh and Ben Davis. It features a sweet flavor with a hint of tartness like a McIntosh, but it’s not as soft, making it perfect for baking.

This apple may at first be deceiving: the skin is yellow-green, not pink. Only by cutting it open is the light pink to deep red flesh uncovered. Loved for its sweet-tart taste and bright surprise of color, it’s a classic favorite.

Another early ripening fruit, Sansa apples boast a beautiful red color with yellow streaking. They’re sweet and juicy with a little tang and are great for eating or for making apple sauce. 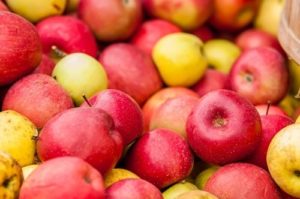 Beautifully round with a striking red color, Crimson Crisp apples are as tasty as they are beautiful. They have an extremely crisp, creamy-white flesh and a tart, rich flavor.

The Red Melba apple has a sweet and juicy flavor, with hints of strawberry and wine. A cross between the Canadian Melba and a McIntosh varieties, it features a deep red color with stripes of gold.

RubyFrost apples boast equal sweetness and tartness with a hearty crunch and a crispy texture. They feature a deep and rich ruby red color. Even better, they’re high in acid and packed with vitamin C, so they’re slow to brown. 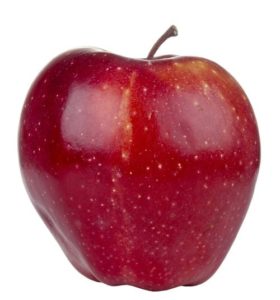 The Jonathan variety produces beautiful, bright red apples with crisp and juicy flesh and a bold, tart flavor. They are the parent apple to many classic favorite types of apples, including the Jonagold and Jonamac varieties.

Discovered in 1978 in Minnesota, the Keepsake is an irregular-shaped apple with a red-over-yellow skin. It has a light-yellow flesh that’s dense and juicy with a sweet, spicy flavor.

Pristine apples boast a delicious sweet-tart taste with gorgeous yellow skin. They have a fresh taste with juicy flesh and an excellent crisp texture. Plus, they mature in early July, weeks before other types of apples.

The next time you reach for apples at your local farmer’s market, consider stepping out beyond your typical favorite. And if you’re looking for an even sweeter treat, consider our Edible® Donuts – Colorfully Glazed. Made with Granny Smith apples sliced into donut shapes and covered in semisweet chocolate and colorful chocolate glaze, these delectable treats are a fun twist on traditional donuts that will wow your taste buds.